In the examples above we have used schedule "my_schedule", whose definition in Schedules Definition Grammar is: 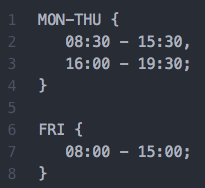